Wildlife officials in Botswana have dismissed poaching and poisoning as reasons for the deaths of 110 elephants since March.

Authorities in the country, which has the largest population of elephants in the world, continue to search for a reason for the deaths.

Fifty-four elephants were found dead at the end of May on the Okavongo Delta, less than two weeks after 12 were found.

It adds to 44 which were discovered in March, officials said. 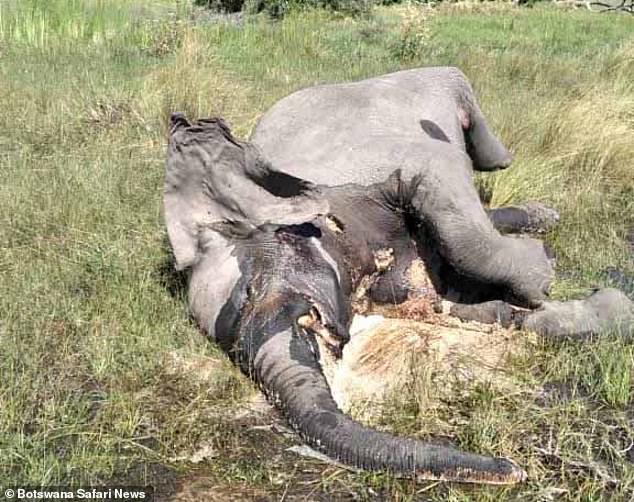 Wildlife officials in Botswana have dismissed poaching and poisoning as reasons for the deaths of 110 elephants since March. Pictured: One of the dead elephants. The picture was posted on the Facebook page of local media outlet Botswana Safari News

Dimakatso Ntshebe, a regional wildlife director for the Botswanan government, told Bloomberg News: 'I would say 90% of the new cases we have found are old carcasses we previously did not locate.'

'However, a few are indeed new deaths. All recovered carcasses do not show signs of poaching.'

The carcasses have reportedly tested negative for anthrax, according to local media outlet Botswana Safari News.

And after the bodies of 12 elephants were found in May, Mr Ntshebe said it was 'very unlikely' the animals had been poisoned.

'If it was poisoning, some scavengers who were feeding on elephant carcasses could have died but that was not the case,' he added.

However, efforts to find out the cause of death have been hampered by travel restrictions imposed in an attempt to deal with the coronavirus pandemic. 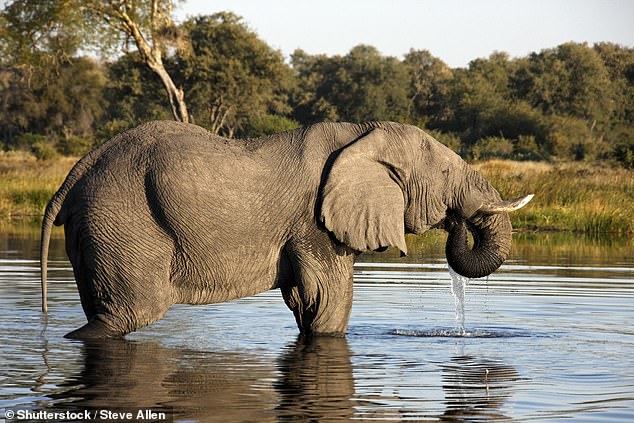 Authorities in the country, which has the largest population of elephants in the world, continue to search for a reason for the deaths

It means that the sending of samples for testing have been delayed.

There are an estimated 135,000 elephants in Botswana. They have become a political issue because they have damaged crops and trampled villagers in the past.

And in February, a major auction for big game hunters to kill 70 elephants was held, the first since the hunting ban was scrapped.

The sale was conducted by a local firm Auction It from the premises of the Ministry of Environment, Nature Conservation and Tourism in the capital Gaborone.

Masisi fended off criticism of his government's decision to lift the hunting ban, saying the move would not threaten the elephant population.