We saw renders of the Huawei P40 Pro with four cameras on the back, a knock against rumors of a penta-camera setup. Today, new renders appear that show both four and five cameras – what’s going on?

The second set of renders come from the reliable @evleaks. What seems to be happening is that Huawei will add three new phones to the flagship P-series instead of the usual two. Apple did it and so did Samsung, so why not Huawei?

Having a closer look reveals something even more interesting – the premiere model (the one with five cameras), dubbed Huawei P40 Pro Premium Edition, has a periscope telephoto lens with 240mm focal length.

Assuming that the main camera has a 24mm lens, that’s 10x optical zoom. Compare that to the four camera model, the Huawei P40 Pro, which has a 125mm periscope lens. That should be 5x optical zoom.

Both versions have an 18mm ultra wide camera. The two additional cameras on the P40 Pro Premium are probably a dedicated macro cam and a 3D ToF sensor. The P40 Pro will have a ToF sensor, according to Teme, another leakster covering the P40 phones. 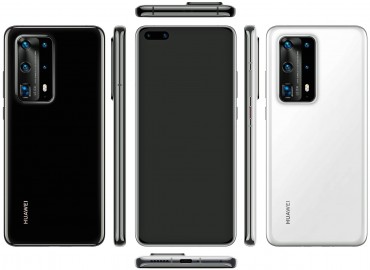