Oil's Near Three-Month High on Trade Optimism and Supply Curbs

Oil traded near the highest level since November on optimism the U.S. and China can reach a trade deal and as an outage at the world’s largest offshore field in Saudi Arabia signaled tightening supply.

Futures in New York rose as much as 1 percent after advancing 5.4 percent last week. President Donald Trump said talks with China were “very productive” as his team returned from Beijing and readied for another round of discussions in Washington this week, raising hopes that a trade war between the world’s largest economies will ease. The Saudis, meanwhile, were said to be repairing a damaged power cable that’s curbed output at the Safaniyah field. 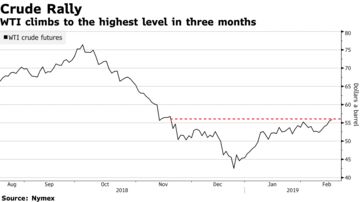 Crude’s surged about 24 percent this year as Saudi Arabia and Russia pledged to expand their output cuts, easing concerns that record U.S. production would result in a global glut. More supply is being threatened because of American sanctions against Venezuela and Iran. Reports that the U.S. and China had reached consensus in principle on the main topics in their negotiations further helped boost investors’ risk appetite.

“Markets are astonished by the amount of production cuts and the further reductions Saudi plans to make,” said Howie Lee, a Singapore-based economist at Oversea-Chinese Banking Corp. “Even though there was no conclusive trade deal from Beijing, the already bullish oil market took no news as good news.”

West Texas Intermediate for March delivery rose as much as 54 cents to $56.13 a barrel on the New York Mercantile Exchange and traded 49 cents higher at $56.08 at 7:34 a.m. in London. Transactions will be booked Tuesday for settlement because of the U.S. President’s Day holiday. Prices last week posted their biggest gain in more than a month.

Brent for April settlement was at $66.65 a barrel, up 40 cents, on the London-based ICE Futures Europe exchange. It gained 6.7 percent last week. The global benchmark crude’s premium over WTI for the same month narrowed to $10.19, after widening to the biggest spread in more than three months on Friday.

Conciliatory signals from the world’s two biggest economies are calming fears Washington will ratchet up tariffs before a March 1 deadline. “Big progress being made on soooo many different fronts!,” Trump said on Twitter Sunday.

Worries about the trade war worsening a global slowdown are receding at a time when OPEC and its allies are accelerating their implementation of the oil-production cuts agreed in December. The Organization of Petroleum Exporting Countries reported a strong start to the latest round of supply reductions, with the Saudis pledging to cut beyond agreed levels.

The impact of the outage at Safaniyah, which has the capacity to pump 1.2 million to 1.5 million barrels of mostly heavy-sour crude a day, could be damped as seasonal refinery maintenance works across Asia and the U.S. typically peak around now. Saudi Arabian Oil Co. said in statement that all its facilities were “safe and normal,” without elaborating on the situation at Safaniyah.