Some members of the Organization of Petroleum Exporting Countries have asked the Central African nation to rejoin the group after 21 years as producers seek to “fight together" to stabilize prices, Bongo said during an hour-long interview at Bloomberg headquarters in New York. Gabon hasn’t made a decision, he said.

While an April 17 meeting in Doha, Qatar, ended with major producers failing to agree on an output freeze, Bongo, 57, said the fact the meeting even occurred was positive and that talks would continue. Gabon, which has cut its budget twice due to falling crude sales, needs a global price of about $60 a barrel and “anything less than $50 is a major problem,” he said. Brent crude gained 0.2 percent to $45.89 a barrel at 8:23 a.m. in London on Thursday.

“What is important for us is how we can work with OPEC towards fighting against this situation of oil prices going down," he said. “It is just important that all the members be going in the same direction."

African nations pumped 8.26 million barrels of oil a day in 2014, almost a tenth of world production, according to BP Plc’s Statistical Review of global energy supplies. It’s too soon to say where producers will go after the Doha talks, which failed as Saudi Arabia insisted a freeze should include all OPEC members, while Iran refused to limit output.

Gabon will hold presidential elections in August that could see Bongo extend his family’s rule over the country to more than 50 years. The nation of 2 million people relies on petroleum for about half its gross domestic product and three quarters of exports. It’s preparing for more budget cuts this year but hopes they won’t have to be implemented, the president said.

Bongo’s government has also been in talks with the World Bank about possible financing, he said.

With prices “going from $100-plus to less than $40, you can understand how we feel,” Bongo said. “It’s like you were having a nice dream and all of a sudden, you go into a nightmare." Gabon is the fifth-largest producer of oil in sub-Saharan Africa. It left OPEC in 1995 after complaining of annual membership fees that were too high for the group’s smallest producer.

Production since then has dropped about 28 percent. Bongo said he expects output to remain stable around 250,000 barrels a day this year and next. Hopes of reviving production by developing offshore reserves will be delayed, the president said.

“With the current situation, exploration is very expensive, so right now we have to wait on that," he said. “But Gabon’s oil future is still good. We have great hopes about what we can find in the future, both oil and gas."

Bongo was elected to his first seven-year term in 2009, succeeding his father, Omar Bongo Ondimba, who died after more than 40 years in power. The son has preached economic diversification, promising to build up the country’s timber, agriculture and ecotourism sectors to lessen its reliance on oil.

Gabon has twice gone to the bond market to help finance the development and is talking about doing so again, though not until after the August election, Bongo said. 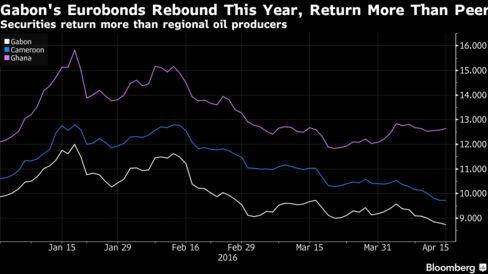 Bongo’s biggest threat in that election is Jean Ping, a former foreign minister under his father and chairman of the African Union Commission. Ping has said he will likely lead the opposition in the 2016 vote and criticized Bongo as a dictator in an interview last month with French newspaper Le Monde.

Bongo rejected the label, saying he was elected and “not forced on the people." Gabon’s having a robust election debate where candidates and the press are free to criticize the president, he said.

“I am proud to be such a lousy dictator," he said.

Bongo wouldn’t specify how many terms he wants to serve, saying that would hurt his political leverage. But “I will not stay for 40 years," he added. “I want to have a life."

Google is now a $1 trillion company

Nigeria and Indonesia are among the leas…

The Art of DIFFERENTIATION – Standing ou…

Ethiopia asks South Africa to help to re…

Brazil could begin rolling out 5G in 202…