In the early hours of Saturday, South Africa again avoided a massive blow: its government bonds were not downgraded to junk.

In a surprising move, Moody’s did not release any report – but just said that “ratings were not updated” for South Africa.

Friday was the scheduled day for an announcement on South Africa’s credit rating. The next date is in November – but Moody’s can change its ratings at any time. 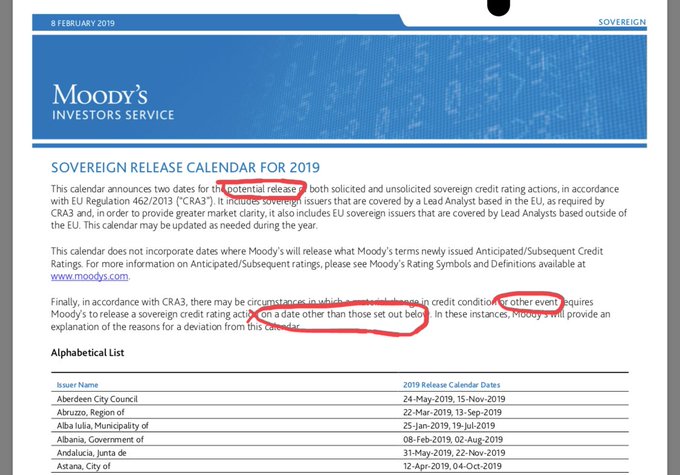 Moody’s postpones it’s potential scheduled review on South Africa, similar to October 2018. This was a growing possibility in my view the past few weeks. It’s in the best interest for an agency to have as much information as possible. #moodys #SouthAfrica

Moody's: Brief update on their website has South Africa listed under "Ratings that were not updated for issuers on the calendar for 29 March". That's it. Certainly their prerogative to issue no review, but a slightly more expansive statement and future date would be courteous.

32 people are talking about this

South Africa currently has a Baa3 rating, the last step before “junk”, with a stable outlook. Polls among economists showed they were split on whether Moody’s would change South Africa’s outlook to “negative” (from stable) – and some predicted it would go all the way to “junk”. A “junk” rating means the agency believes there's is a bigger chance that government won’t be able to pay back its creditors.

Gov. fails on promises, yet another Moody's reprieve. Sterling work from Treasury team under very difficult circumstances. Risks ahead.

The two other big ratings agencies, Fitch Ratings and S&P Global, lowered South Africa's credit rating to "junk" in April 2017 after Pravin Gordhan was fired as minister of finance.

If SA lost its investment rate grade from Moody’s as well, it would have cost the country its place in the most important group of government bonds. The Citigroup’s World Government Bond Index contains only bonds that are investment grade.

All the many overseas investment funds that are only allowed to invest in investment grade bonds would have been forced to sell their South African government bonds.

Bank of America previously estimated that South African bonds would have been sold off to the tune of $14 billion (R200 billion).

This would have lowered the value of our bonds, and make it much more expensive for government to borrow money to keep the country afloat.

What are government bonds?

A bond is basically an IOU, with the borrower agreeing to repay an amount plus interest. If a bond issuer is seen as riskier, investors will demand higher interest rates. If South African bonds were rated as junk, government would have to pay higher interest rates. This means the state would have to pay billions more in interest, at the cost of investments in local roads, hospitals and services.

Retaining our investment grade rating, which SA has held since 2001, should mean the following:

1. The rand will get some respect

A sell-off of government bonds would have meant a massive outflow of money out of the country – putting pressure on the rand.

A weak rand affects everything, starting with fuel prices. Oil is South Africa’s biggest import. If the rand weakens, oil (which is priced in dollars) becomes basically immediately more expensive.

Imported electronics and machinery are pricier if the rand is weak. And South Africa’s maize and wheat prices are also linked to the global dollar prices.

The rand remained relatively stable following the announcement at R14.48/$.

Given that some of the pressure on the rand should ease, this means that inflation will be contained. And this gives the Reserve Bank some leeway to perhaps cut interest rates as a much-needed boost to a comatose South African economy.

The credit ratings of Standard Bank, Absa, Nedbank and FirstRand are all tied up to the rating of South Africa, where they make most of their profit. S&P downgraded seven local banks directly after it cut South Africa to junk. This means that banks have to offer higher interest rates when they borrow money.

By law, banks are also forced to hold government bonds, which would have hurt them in case of a bond sell-off.

4. Further income tax and VAT hikes may be limited

If government has to pay more in interest on its debt, it will need more money from you to cover its basic expenses. This can only mean one thing: higher taxes.

We survive yet another #Moodys announcement.

Guess it's back to Stage 4 loadshedding on Monday

The  National Agency for Food and Drug Administration and Control (NAFDAC) on Friday destroyed expired, substandard and falsified medical products, and others worth N2.95 billion.

The products were destroyed at the Oke-Diya, dumpsite, Shagamu Area of Ogun State, Southwest Nigeria.

The exercise was supervised by NAFDAC’s Director=General, Prof. Mojisola Adeyeye.

According to Adeyeye, items being destroyed were made up of substandard and falsified medical products, unwholesome processed food products; unsafe cosmetics, counterfeits and other expired NAFDAC regulated products seized by the agency from manufacturers, importers and distributors.

Others are expired products voluntarily handed over to the agency by compliant companies, Non-Governmental Organizations (NGOs) and Trade Unions.

She said the current Management had been given the mandate by the government of President Muhammadu Buhari to ensure that the health of Nigerians was safeguarded and that in line with this mandate, the agency stepped up its prevention, detection and response activities towards the elimination of substandard and falsified products, unwholesome foods and counterfeiting of all NAFDAC regulated products in the preceding year by training and retraining of relevant NAFDAC staff.

“Furthermore, the Agency has taken the following strides in the fight against counterfeiting in Nigeria in the first quarter of 2019: investigation and enforcement officers intercepted a trailer transporting assorted Pharmaceutical products to an unknown destination. The importer, Mr. Luke Mbah, has been arraigned at the Federal High Court, Lagos for smuggling banned and fake 488 cartons of Barcadin with Codeine (cough syrup), fake 207 cartons of Afrodiac Diclofenac Potassium tablets, fake 44 cartons of feed-fine Cyproheptadine tablets (50mg each) and fake 190 cartons of De Really Extra (Diclofenac Sodium tablet) worth  ₦311,000,700.00.

“One Mr. Madubuike Chukwunonye who allegedly sold Cough Syrup with Codeine to a BBC undercover agent in April, 2018 was arraigned at the Federal High Court, Lagos. The defendant was on the run after a documentary on the alleged transaction was aired by BBC and the Nigeria Police Squad of the Federal Task Force on Counterfeit and Fake Drugs and unwholesome processed Foods invited him for interview. He was arrested by the Nigeria Police at Idiroko border while trying to flee to Benin Republic. He was subsequently handed over to the Agency for prosecution,” she explained.

However, Adeyeye pleaded with the National Assembly to pass the Counterfeit Medical Products Bill that would strengthen the agency’s fight against counterfeiting in Nigeria.

“It is pertinent to mention that the fight is capital intensive and we need the support of the States, Local Government Councils and all credible and responsible Corporate Bodies. We want at this juncture to reiterate that the return of the Agency to the Ports and Borders, and our close collaboration with the Nigeria Customs Service has immensely boosted our interception of several containers of unregistered pharmaceutical products, including banned Tramadol of high strengths that were destined for the Nigerian market,” she said.

The Nigerian Maritime Administration and Safety Agency (NIMASA) says it will soon engage an Israeli firm, HLS International, to fight piracy in the Nigerian waterways.

Mr Dakuku Peterside, the Director-General of the agency said this in Uyo on Friday.

Peterside said that the Federal Government had approved what he called NIMASA Total Spectrum Maritime Security Strategy in partnership with the Israeli firm to fight piracy along the waterways.

He explained that the Israeli firm would help train and re-train some security personnel to fight piracy, acquire asset and invest in integrated surveillance tools.

The Director-General said the agency was pursuing dedicated anti-pirate law in order to have a legal backing to engage in the battle ahead.

“When the law is made and the agency intercepts and arrests any sea pirates, it will enable us to prosecute them,” he said.

He noted that the Federal Ministry of Transport was already championing the cause to address the under utilisation of Nigerian ports.

He added that a special committee had been set up to identify infrastructure needs and ascertain NIMASA’s security issues.

He said that the agency had also inaugurated more vessels to trade within Nigeria’s coastal space, adding that before now foreign vessels had dominated the space.

“But today we have lots more of Nigerians owing Nigerian flag vessels trading within our coastal water,” he said.

Angola Climbs 19 Places in Fight Against…

Water sachet use in Ghana: how to stop t…

Coronavirus: WHO postpones decision on C…

AfDB to invest $600m in Africa

N108.427tn worth of transactions execute…

The Dollar Remains the Dominant Currency…

Nigeria’s economic growth will be stagna…